To prevent only Google web crawlers from indexing a page:

DMK Productions has deep roots in the creative arts arena. Our principal started out in the music, recording and live production industries and then transitioned into advertising, marketing and sales, while still keeping his hand in the production pie.

Along the way – video, photography and copywriting were brought into the fold and creating content became our specialty.

Today at DMK Productions it’s all about storytelling for businesses, ministries and non-profits. Telling the story that captures the viewer, reader or listener’s attention, and keeps his or her attention. Today, it’s all about capturing and creating content that gets to the heart of your subject and the heart of your viewer, listener or reader. Today, it’s about helping our clients to elevate the message – whether it be on the web, via broadcast channels or some form of digital communication.

A long time ago in the land of Redmond, as a young audio engineering college student, Dave got his start at a production company and studio facility. Since that time he has spread his wings and worked in many different industries and businesses. From small advertising agencies and niche retailers to many a small business and ministry, he has filmed and documented hundreds of stories. Dave’s journey as a producer, storyteller and copywriter continues even after years of hands on experience. As a student of creative, cinematography and storytelling you’ll find him on any given day – studying, testing and applying his craft.

In 2016 he won the Small Business of The Year at the Best of the West Awards in Eastern Washington. Besides production and creative services he has also published two books, is an Expert Author at Ezine Articles, and has published hundreds of articles on the topics of advertising, marketing, and sales. His third book about small business is due out in early 2020. 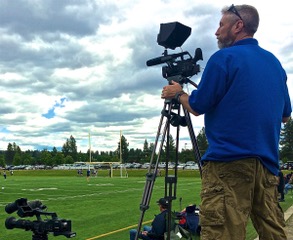 Steve was born and raised in New Orleans, LA. and spent most of his career in the U.S. Air Force as a combat videographer. He retired from active duty in 2008. After retiring he was re-hired as the Lead Video Production Specialist at the U. S. Air Force SERE School at Fairchild AFB, Washington. Steve has a combined federal service of over 25 years with an additional 9 years as a freelance videographer and production specialist. He’s a certified aerial drone pilot and is also the founder of Next Level Sports Films and Clear Image Media. When he’s not in the field capturing content on his Sony camera you’ll find him either entrenched in the edit suite or enjoying time with with his wife and grandkids. 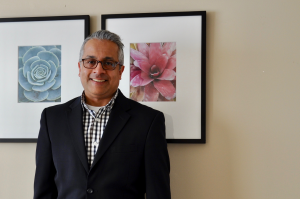 Keith D’Mello is a Creative Director with 30 years of experience collaborating with companies to craft their brand and identify opportunities for increased customer recognition, sales and long-term growth. Using clear communication and engaging design as tools, he has strategically created campaigns to help companies grow their business. Spending the first 20 years of his career at Hachette-Filipacchi Media US as an art director at ELLE Magazine and as the Design Director at Metropolitan Home Magazine, Keith oversaw the design, visual direction and execution of both global brands including the magazines, books, websites and corporate marketing initiatives.

Keith has designed collateral for non-profit organizations and has earned several awards for art direction and design from the Society of Publication Designers and Folio magazine. He has also served as a judge for design competitions both in the United States and Canada.

From products, services, food & beverage, to information and people, our team is here to help you tell the story. You provide the story, concept and idea, or we can help you create it from scratch. Either way, we’ll provide the creative, the gear and the team to capture and assemble all the elements like motion (video & film), still photos, audio, music, sound efx, graphics and art direction. On location or in the studio – we’re comfortable working where you need us to be. You can see us in action on Instagram @dmkproductions or on Linked In where we post about current, recent and past productions. Now all you need to do is take the next step and Contact Us. We’ll connect to find out how we can best serve you and work together bringing your stories to life online and offline. 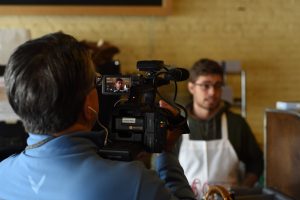